The enthusiasm a county writers and illustrators group has for a long-standing literary award has led to them not only shadowing the 80th
anniversary of the CLIP/Carnegie award but also prompting the return of a city festival.

Lincolnshire’s Society for Children’s Book
Writers and Illustrators (SCWBI) Carnegie shadowing group are eager to discuss with fellow children’s/young people book enthusiasts the highlights of this year’s short list and see who agrees, or doesn’t, with the judges. 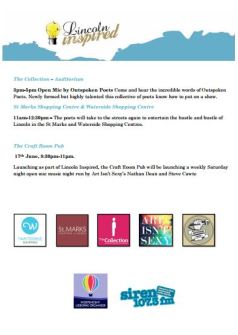 The SCWBI team will be leading the discussion as part of Lincoln Inspired: One Spectacular Saturday.

The Carnegie Prize – what makes a great read for young people? will be held at The Collection in Lincoln from noon to 2pm on Saturday (June 17th) ahead of the winner of the Carnegie Medal being announced on Monday (June 20th).

At the same time as SCWBI approached the organiser of Lincoln Inspired, which saw its last outing in 2015, venues that had held events in previous years were also telling Sara Bullimore that the festival had been missed last year – so she rose to the challenge.

The whole day is free and has something to appeal to fans of children’s literature, poetry and those keen to hone their own writing skills.

Mini readers can enjoy an introduction to The Magical World of Fingley with help from Astoria the Pixie and Elgiva the Elf at The Collection from 10am to 2pm.  The fun treasure hunts, magical drawings, mysterious maps and more are recommended for age 5 to 8.
Also in the Orientation Hall from 10am to 2pm will be an Usbourne Books stand selling a range of the publisher’s educational and activity books and novels.