How many festive theatre goers can say they’ve seen a show featuring a sly, upper class, anthropomorphized furry toy dog who is a master of disguise this Christmas?

Thanks to being guests of the Lincoln Performing Arts Centre for the morning performance of Ready, Steady, Yeti! on Saturday, the minis can count themselves among the elite few who have not only been introduced to the cunning canine Colonel Snitterby but have rapped along with him too.

An ode to the wonders of youthful imagination, Ready, Steady, Yeti! follows a young sister and brother as they go on a Himalayan adventure to search for the Abominable Snowman.  Racing against the Colonel to find the legendary creature first, they sail through frozen seas, traverse treacherous terrain and make it to the top of ice-capped mountains without ever leaving their bedroom and making sure they are most definitely home in time for tea.

The warm-hearted story, supported by original songs and an inventive set, contrasts the ocassional cold heartedness of competitiveness with the fun and success that can be found in teamwork and friendship, revels in wordplay and celebrates creativity. 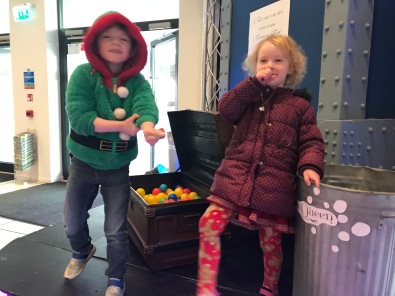 All three minis’ imaginations were thoroughly captured by the tale of the hunt for the mysterious not-so-monstrous monster and were even inspired to stage their own performance on the LPAC foyer’s mini platform after the show.  Willow proved that she had been listening during Yeti! when it was stated that all good stories begin with “Once upon a time”.

Taking on board the message that not everything has to be a race is clearly a work in progress however, loudly and proudly proclaiming herself the winner of getting back to the car first on the way home.

If you want to learn how to do the Explorers’ Salute and discover if a Yeti’s favourite food really is spaghetti then you can catch Ready, Steady, Yeti! at the Lincoln theatre until January 5th.  Find out more at www.lpac.co.uk