A few days after finding out Willow will be in Ladybird class in September we found out that Luke will be in Crocodiles when he moves up a year.  So now I have added green paint to our craft shop haul of all things red and black.

When considering crafting crocodiles my first thoughts are to start collecting egg boxes but, for Kerry from Blissful Domestication, it’s wooden pegs, green pipe cleaners and googly eyes that make her shopping list in order to make her Peg and Pipe Cleaner Crocodiles – and the peg’s action make the completed reptiles eminently snappable!

Having bought several new ladybird books for Willow, Luke was quick to insist he should also receive some appropriate new reading material.  We already had I Love Crocodiles: First facts and pictures by Steve Parker and Steve Roberts as well as stories such as Open Very Carefully: A book with bite by Nick Bromley and Nicola O’Byrne and Alan’s Big Scary Teeth by Jarvis.  We’ve had Roald Dahl’s Enormous Crocodile recommended to us several times and the titles we’ve chosen to add 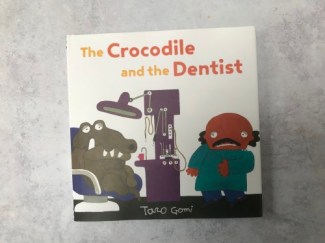 to our home library so far are Could a Crocodile Play Basketball? and other questions by Aleksei Bitskoff and Camilla de la Bedoyere and The Crocodile Who Didn’t Like Water by Gemma Merino.

Another title featuring the scaly creature that Jane from Hodge Podge Days recommends is The Crocodile and the Dentist by Taro Gomi.  Describing it as “a lovely, easy to read story with lots of repetition” Jane found it “full of simple humour and empathy” as both titular characters learn to be brave and face their fears.

For Rainy Day Mum’s Cerys it’s all about finding more life-sized versions of the animal, whether it be wooden sculptures in Rendlesham Forest when on Scavenger Hunts with Toddlers or similarly tame ones that provide a safe photo opportunity at Colchester Zoo (World Animal Day Blog Hop).  But the highlight of their visit to Hunstanton Sea Life Sanctuary saw her son finally came face to face with one of the centre’s three very alive crocodiles, “luckily through a sheet of glass”.

What is your favourite fact about the many-toothed creature?  Let us know in the comments below.