Christmas was put on hold at the start of last weekend in favour of all things second birthday related.

I can’t believe Willow is already 2!

She’s fairly sure she’s already 14 and certainly approves of presents and cake so is sure to be looking forward to many more birthdays to come but such occasions always make me want to grab hold of the earth and slow it down a little, keep my mini ones mini a bit longer.

Time has gone even faster with Willow than with Luke, I fear if we blink we’ll open our eyes to our third baby’s 18th birthday.

We didn’t have to think too hard about what to treat her to and her new kitchen seems to have gone down very well so far – just as well considering the furniture moving it took to fit it in.  Fortunately the size of it has meant that brother and sister have been able to share it relatively amicably so far too.  Hopefully, as soon as their legs allow, they’ll be replicating what they’re currently practising for real in the kitchen behind that wall.  Luke’s insistence on doing some baking in the last couple of days has given me hope (as well as fairy cakes)! 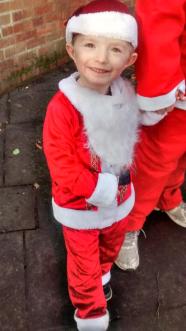 Sunday included more presents for Willow from friends and family but also featured Christmas in large again as we took part in the Lincoln Santa Fun Run.

Daddy has done it in the past on his own but last year we did it as a family for the first time.  Despite it being just a little bit of a stretch too far in the end (Finishing last didn’t stop it being a fun run) it was clear that this type of event is very much Luke’s thing.

This year the excitement started early as we tried their Santa outfits on to make sure they still fitted ahead of the race, and told them that grandmum, grandma and pops would be joining us this time too, and we had to keep reiterating that it wasn’t going to take place that day (or the next…). 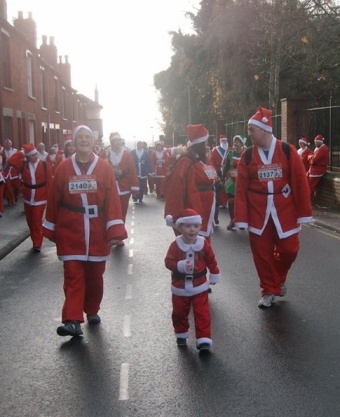 Fortunately his enthusiasm hadn’t waned when the day came and it made a mummy’s heart swell to see him in his element skipping, spinning and ho ho ho-ing leading our way to the starting line.

And what a difference a year makes to a mini one.  Managing to determinedly walk most of the way in 2015 scraping through at the end as they were packing up, 2016 saw him run three quarters of the way with daddy, arriving well within the melee reaching for their water bottles and impressive medals.

2016 and Daddy saw him run it anyway – this mummy carrying a two year old on her back and sporting a 32-week pregnant tummy on her front was quite happy to take a more ambling approach, taking in the atmosphere and all the fun variants people made to their, their children’s and their dogs’ costumes.

Willow, a very savvy lass, took an even more relaxed approach to the event, deciding once again to sleep through most of it, preserving her energy for further present opening and cake eating in the afternoon.

As well as last year’s and this year’s Santa Run, she’s also slept through last year’s Race for Life and was in the womb for the year before’s – she’s definitely worked out the best way to complete these events.

As a family we’ve also taken part in a Sports Relief Mile and it would be lovely to find more family-friendly events like these where we can indulge Luke’s need for speed with an added bit of spectacle.

We ran out of weekend quickly too which means we still haven’t started most of our Christmas shopping or fetched the decorations down from the attic let alone put them up – but there’s still two weekends left aren’t there…?