What does a sponge inspire you to do?

Something as exciting as the washing-up?  To take a bath?  Clean down your cupboards?

When Turned On Its Head looked at a sponge, they saw the inspiration for their latest participatory dance show for mini ones.

The company’s purpose is “to engage audiences and their families in a journey of discovery and imagination” and yellow, blue and pink sponges, along with a few plastic flexi buckets, provided the squashy launch pads into dream-like worlds where flying, dancing, raining sponges, tall bendy legs, alien creatures and squishy, spinning haute couture were essential elements to the young audience’s experience at the Lincoln Drill Hall today. 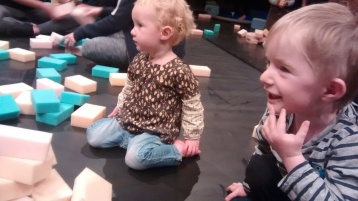 “Children are like sponges. They absorb all your strength and leave you limp, but give them a squeeze and you get everything back”

The Mini Malpi watched and joined in the afternoon performance of the show that’s set to a 1970s soundtrack and “is about all things spongy: a child’s ability to soak things up like a sponge, a nice piece of cake or the squashy, squishy texture that fascinates children and adults alike”.

The babies to four year olds, as well as their accompanying adults, were captivated by the show’s sensory wonderment, giggling from the outset and needing little encouragement to join in.  Particular highlights for my mini ones were to fill a bucket up with sponges and tip them over your head, going for a well-cushioned spinning flight in a bucket, building towers of sponge to knock down and generally being able to throw the springy absorbers around under disco lights with gleeful reckless abandon.

Big smiles and eager exploration confirmed a delightful time was had by all at the arts centre, and, of course, we have many sponges at home too which we may never look at quite the same again…

Other shows for little ones coming up at the Lincoln Drill Hall include:
Hubbub – a Musical Adventure, for age 5+, October 16th & 17th
Mavis Sparkle, for age 4+, November 6th