Now we’re nearing the end of May show season is well and truly underway and, if you live in such an agricultural county as Lincolnshire, it’s pretty hard to miss all the different events that are staged in celebration of the countryside.

In April we visited the Lincolnshire Showground for Countryside Lincs and last weekend it was the turn of the Woodhall Spa Country Show.

Back before my husband’s cultural references included mentions of Rapids Johnson whenever we’re near animals, such outings probably included a lot less bouncy castles but Luke and Willow both enjoyed a bounce at the beginning and end of our visit and we’re certainly not often going to deny them the opportunity to use up a bit of energy. 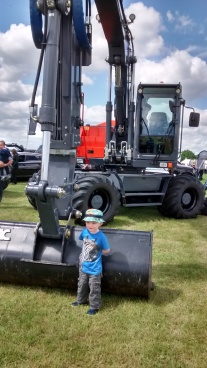 A visit to see the big tractors was always mandatory though and both big and little boy were happy viewing the machinery on display.

And Luke even got to meet “Batman”, otherwise known as the bat the Lincolnshire Bat Group brought along with them.